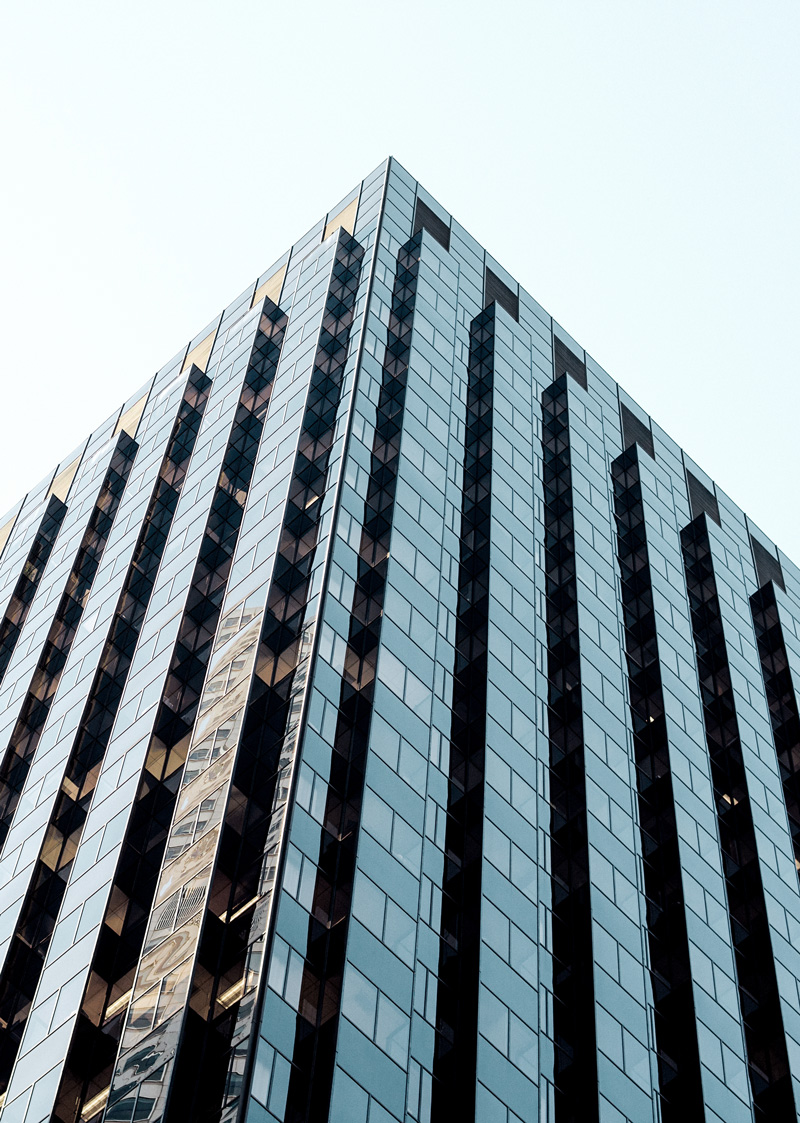 What is Empire Power?
At the core, Empire Power is the combination of your military, research, political, and prestige attributes (from your viziers and heirs). That sounds simple enough, but there are many things that influence those stats, especially when it comes to your viziers. Before we jump into the ways to increase empire power, I want to quickly provide some background on what the four different stats (military, research, politics, and prestige) mean in the game. 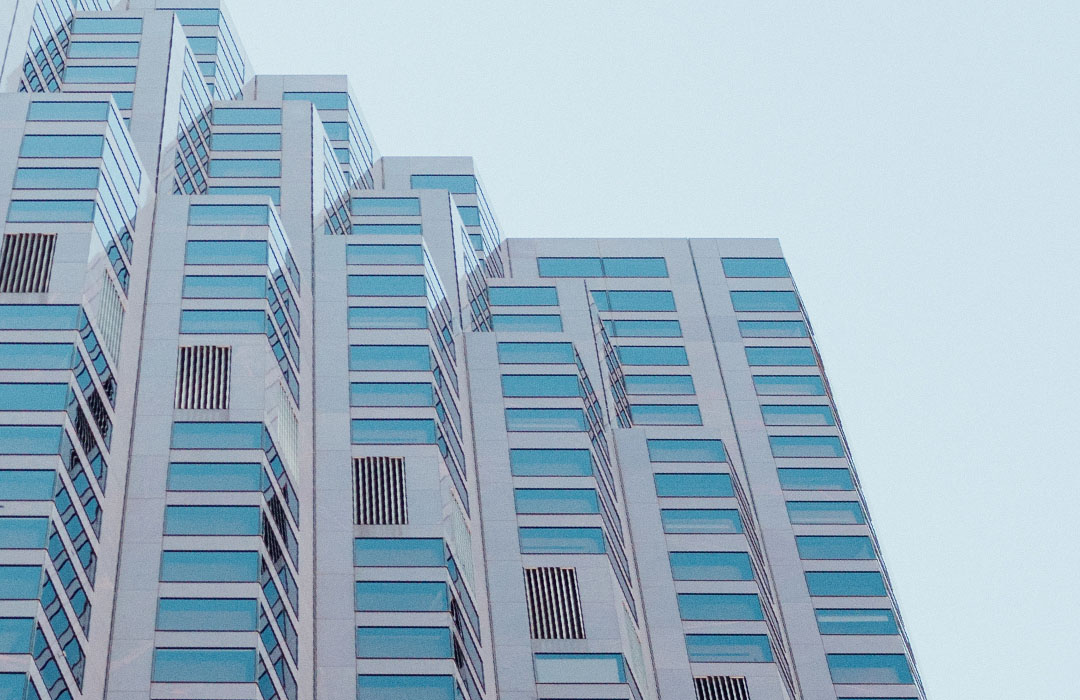 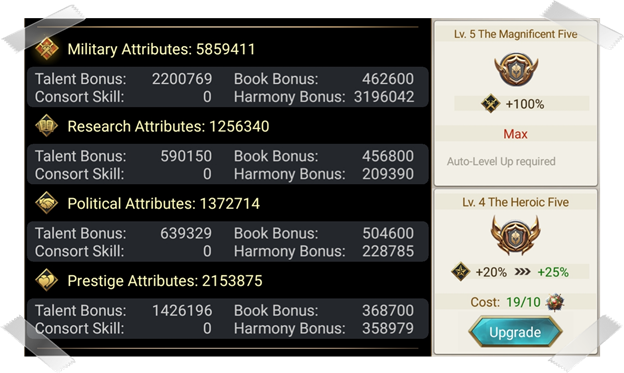 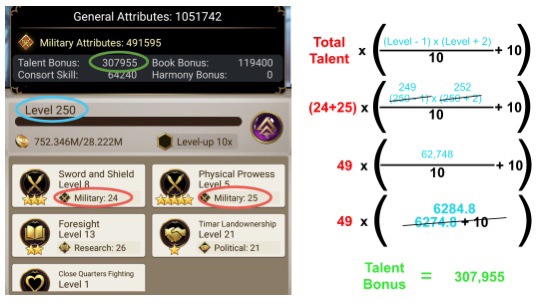 Powerful Heirs
We’ve already covered how to make your heirs more powerful, but raising and marrying off heirs is a nice way to give yourself an empire power boost. Heirs help to raise your Empire Power in two ways:

Important Note: When marrying off your heirs, try to do it directly with someone you know has high-level heirs. If you put them out on the open market, you will likely get less powerful heirs in return. It is super easy to send an heir directly, just go to your buddy’s profile page and click marriage button at the bottom. 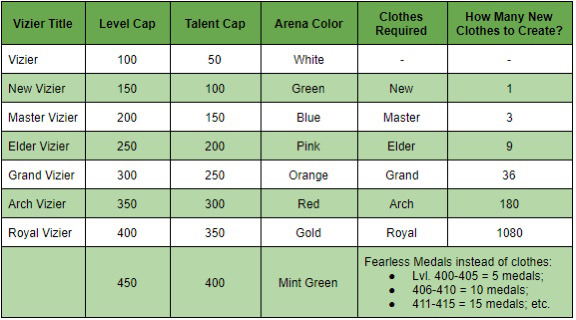 Maxing Your Viziers
While heirs can provide a sizable boost to your total Empire Power, it is minor when compared to the boost you can accomplish with your viziers. The Empire Power of viziers is calculated from vizier level, talent, attribute books, and harmony/consort bonus.

Vizier Level
Each vizier will start as a Level 1 and you can use gold to gain levels (the amount of gold necessary to go up a level grows for each successive level). You can level your viziers from Level 1 – Level 100 with gold alone, but then you’ll begin needing clothes/hats/rings (“clothes”) to further promote your vizier. Lower-level clothes can be combined to create fancier versions in order to further promote your vizier. Once you hit Level 400, you not only need to spend gold to level your viziers, but also require Fearless Medals.

Important Note: you should not use the “Level-up 10x” option when leveling your viziers as it eliminates your opportunity to randomly receive a bonus free level-up.

Important Note: When your viziers are below Level 60, they cannot participate in many elements of the game (arena, war, and some coalition quests). THIS ISN’T NECESSARILY A BAD THING! You are better off not having your crappy viziers (think Lala) show up as your attack vizier in Arena random pairings. (All of your viziers will still populate in Arena when someone else is attacking you, but if you keep crappy viziers below Level 60, you’ll end up with your more talented/powerful folks when you’re the one doing the attacking).

Talent:
Now that we’ve covered how to use gold to gain empire power, we need to talk about talent as they work together. Increasing talent is accomplished by using badges, almighty badges, and book xp to gain talent points. How many talent points you gain when you successfully use badges (or use an almighty badge/book xp) is equal to the number of stars for that specific talent.

Individual talents range from one to six-stars. The higher the number of stars, the greater the impact on the corresponding attribute.

Important Note: While it is tempting to use badges on lower-star talents because they have a higher likelihood of success, in general, this isn’t the best strategy. Instead, taking a chance on the 6-star talent will have a better pay-off over the long run, even if you don’t get an immediate success. This is because viziers with lower-star talents tend to have much lower maximum power levels than viziers with higher-starred talents. For example, compare the maximum military power for Veli (a common starter vizier) and Yavuz (or any of the O4, but I like Yavuz the best because he’s hot). 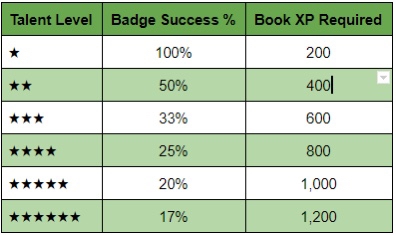 Alright, now that we’ve covered vizier talent very briefly, I want to touch on how talent and vizier levels interact to calculate your empire power (fair warning, there is math involved…but I tried to boil it down to make it easier to follow). You’ll remember that your Empire Power is calculated by adding up all of your attributes (military, research, political and prestige). Well, each vizier has an influence on those ultimate stats, based largely on the vizier’s level and talents.

There are three different colored circles in the screenshot (left) that correspond with the colors in the math equation on the right.
• Blue: The Vizier Level (using gold and clothes to level-up)
• Red: The Vizier talents (in this case, two different military talents). Notice that the 5-star talent has been successfully activated 5 times, resulting in 25 military talent points.
• Green: The total talent bonus for this vizier.

The good news is that you don’t need to do the calculation yourself – the game will automatically update every time you successfully level a talent or spend gold to level your vizier.

Harmony/Companion Bonus
Now that we know how leveling and talent work together, let’s go ahead and add in another complicating factor – harmony or companion bonuses. Thankfully, they work in exactly the same way. These bonuses provide a percentage boost on a viziers’ attributes (from talent and level). Additionally, these two bonuses also influence Attribute Books! If you were to use a +1,000 Military Tome on a vizier with a 20% companion/harmony bonus, you’d receive an extra +200 military attributes for your vizier.

Harmony Bonuses are relevant for Foreign Legends, The Magnificent 5, and the Outstanding 4. To increase harmony, you need to either add more of their class to your stable of viziers or use badges/foreign legend scrolls to increase an individual vizier’s harmony bonus.

Companion Bonuses are for all of the viziers for which you have a corresponding companion. You will utilize Companion XP (gained from banging your hoes) and Elegance Pearls (gained from paint/reading/music rooms) to activate the companion skill bonuses.

• Companion XP: When you click on a companion in your harem and go to the Skill tab, you’ll be able to spend Companion XP to increase different attributes for corresponding viziers. The different companion skills will be unlocked once you have reached a certain intimacy level with the companion (200 intimacy = all 5 companion skills unlocked). The Companion XP you’ve earned from visiting with this ho will allow you to level-up these skills, getting a boost to your vizier.

Even if Lala isn’t a vizier you want to work on he can be helpful at raising your total Empire Power score. For viziers you haven’t given many books, badges, or gold – spend your xp on the first two skills. For viziers where you’ve made an investment, work on the last four skills – the percent (%) bonuses. Percent bonuses boost Talent & Level along with books. If you haven’t invested many books or badges in that vizier, your gain from using the % boosts is minimal for the cost.

• Elegance Pearls: Elegance Pearls are gathered from paint, reading and music rooms and can be used to boost the skills of any of your companions (doesn’t matter which ho earned them). Pearls can be spent by clicking on the circle on the left-hand side next to each skill. Companion skills start at 0-stars and can be leveled-up to 6-stars each. Just like Companion XP, save your pearls to get the extra points during Empire Power Rush.

For example: You have Lufti’s second companion skill (Entertaining) at level 200 and raise it from 0-stars to 3-stars during the rush. This will give 36,000 Empire Power. Don’t discount the small gains; they could be the difference between 1st and 2nd place.

A better use of pearls though is on percent (%) bonus skills. A military % bonus skill at level 100 with 0-stars gives 50% bonus to military attributes. Increasing the skill to 3-stars (while staying at level 100) will add an extra 30% bonus bringing your total bonus to 80% for military attributes of that vizier. This can be a much larger gain than boosting the stars on the first two skills (especially on viziers where you’ve invested badges and books).

Important Note: It doesn’t matter what order you use Elegance Pearls or Companion XP.

Who should I focus on?

Harmony Bonuses and Companion % Bonuses are the key to high Empire Power gains. Remember that a vizier with 100% harmony or companion bonus is giving you 2x the value of the book or badge you used. For most players this will be one of your Magnificent 5, Outstanding 4 or the Vizier attached to your top companion.

You want the highest percent bonus for each of the four categories: Military, Research, Politics, and Prestige.

Credit for guide goes to Jass, Thank you

Union Brawl So let’s get started about the newest addition to the Game of Sultan’s universe, Union Brawl!       Union Brawl is an opportunity to work together as a union and fight other unions using your top five powered viziers. This event is similar to both... 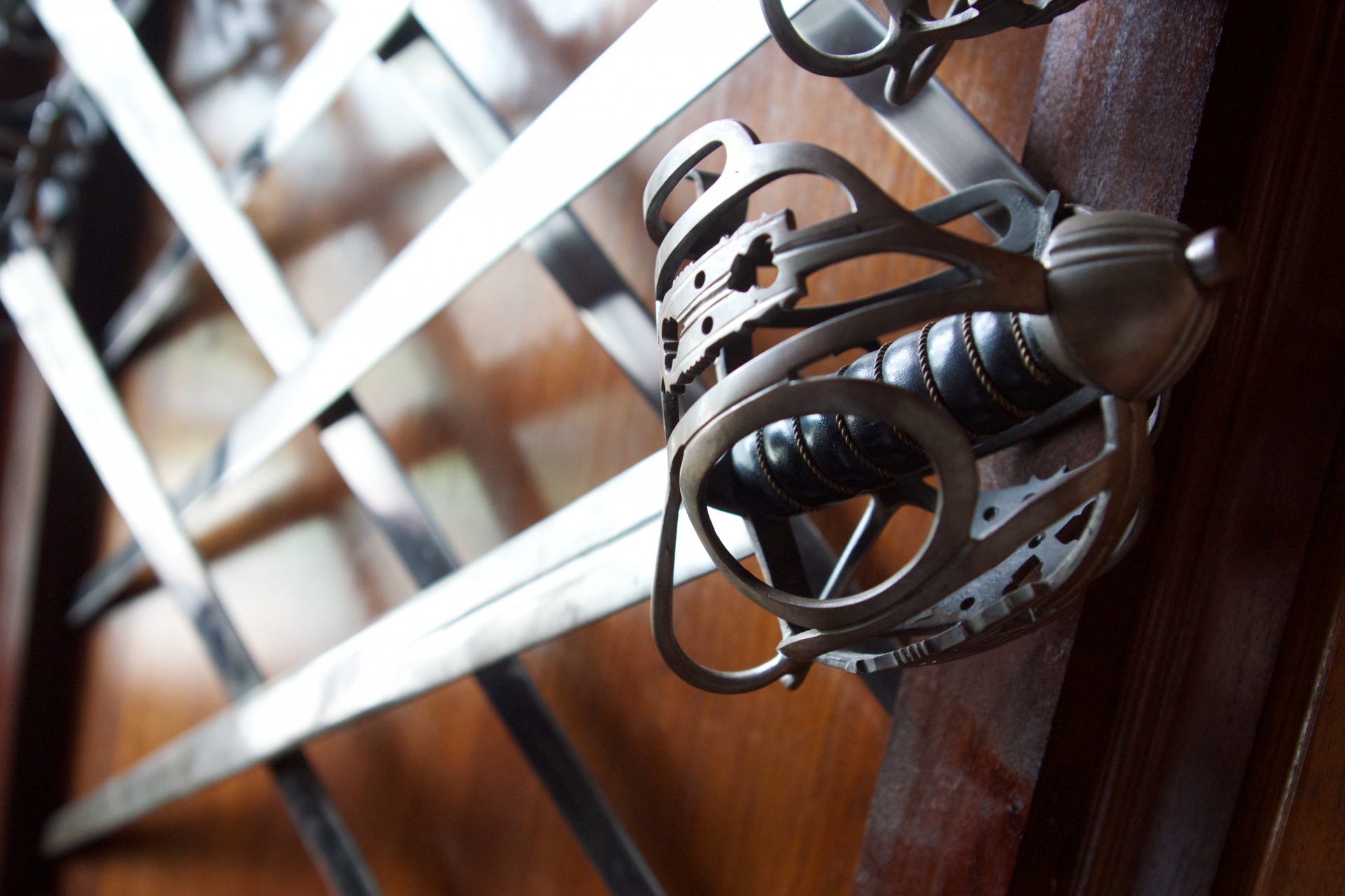 Daggers   So Let’s talk about daggers,      The Dagger game has been given a very recent update, now being called legendary daggers.       Daggers is played using the same game format of 2048. What this means is you will get dagger of a base level, usually one... 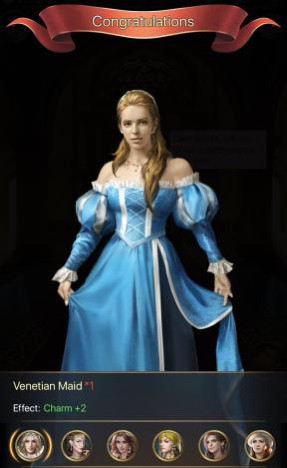 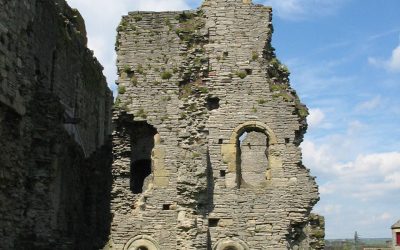 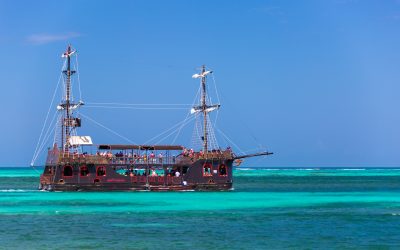 Pirates So Let’s talk about pirates,      The pirate game, now called War of Hunters, is played by creating a fleet of four players. These players can be anyone. To become party of a crew you need to either join an existing crew or make one of your own. The... 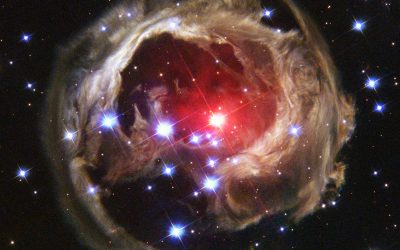